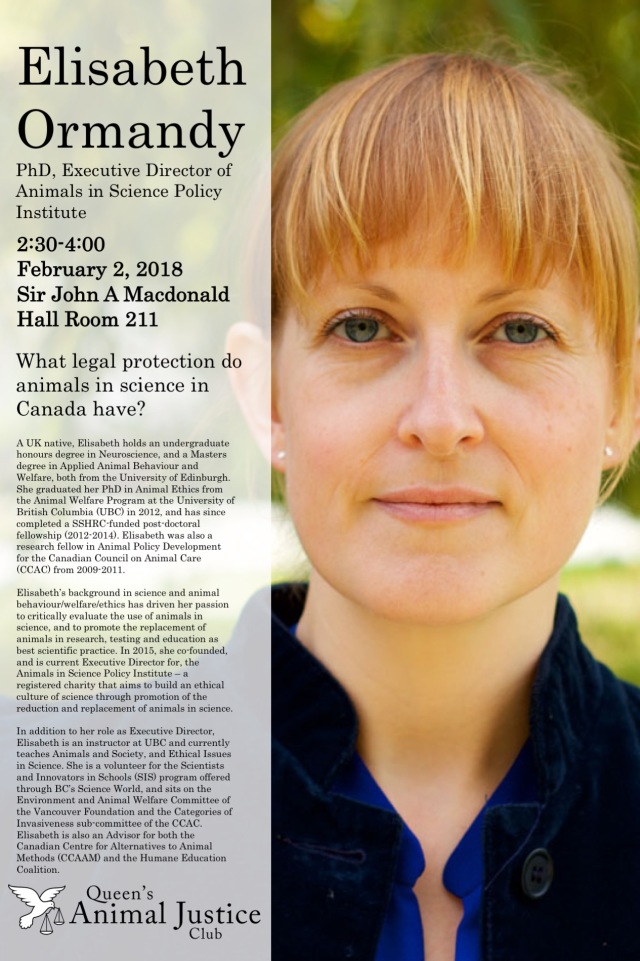 The Queen’s Animal Justice Club has invited Elisabeth Ormandy, from University of British Columbia, at Queen’s university to give the talk “What Legal Protection do Animals in Science in Canada Have?” this week at Queen’s University. Dr Ormandy is also the Executive Director of the Animals in Science Policy Institute. Everyone is welcome to attend.

Further information about the speaker and the abstract:

A UK native, Elisabeth holds an undergraduate honours degree in Neuroscience, and a Masters degree in Applied Animal Behaviour and Welfare, both from the University of Edinburgh. She graduated her PhD in Animal Ethics from the Animal Welfare Program at the University of British Columbia (UBC) in 2012, and has since completed a SSHRC-funded post-doctoral fellowship (2012-2014). Elisabeth was also a research fellow in Animal Policy Development for the Canadian Council on Animal Care (CCAC) from 2009-2011.

In addition to her role as Executive Director, Elisabeth is an instructor at UBC and currently teaches Animals and Society, and Ethical Issues in Science. She is a volunteer for the Scientists and Innovators in Schools (SIS) program offered through BC’s Science World, and sits on the Environment and Animal Welfare Committee of the Vancouver Foundation and the Categories of Invasiveness sub-committee of the CCAC. Elisabeth is also an Advisor for both the Canadian Centre for Alternatives to Animal Methods (CCAAM) and the Humane Education Coalition.