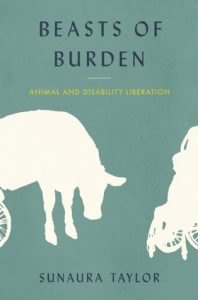 Beasts of Burden: Animal and Disability Liberation, by Sunaura Taylor (The New Press, 2017)

Beasts of Burden suggests that issues of disability and animal justice—which have heretofore primarily been presented in opposition—are in fact deeply entangled. Fusing philosophy, memoir, science, and the radical truths these disciplines can bring—whether about factory farming, disability oppression, or our assumptions of human superiority over animals—Taylor draws attention to new worlds of experience and empathy that can open up important avenues of solidarity across species and ability. Beasts of Burden is a wonderfully engaging and elegantly written work, both philosophical and personal, by a brilliant new voice.

You can read a detailed review of Taylor’s book at Animal Liberation Currents. 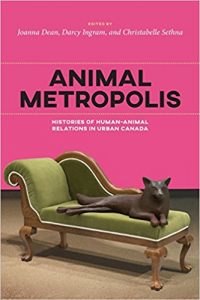 Animal Metropolis brings a Canadian perspective to the growing field of animal history, ranging across species and cities, from the beavers who engineered Stanley Park to the carthorses who shaped the city of Montreal. Some essays consider animals as spectacle: orca captivity in Vancouver, polar bear tourism in Churchill, Manitoba, fish on display in the Dominion Fisheries Museum, and the racialized memory of Jumbo the elephant in St. Thomas, Ontario. Others examine the bodily intimacies of shared urban spaces: the regulation of rabid dogs in Banff, the maternal politics of pure milk in Hamilton and the circulation of tetanus bacilli from horse to human in Toronto. Another considers the marginalization of women in Canada’s animal welfare movement. The authors collectively push forward from a historiography that features nonhuman animals as objects within human-centered inquiries to a historiography that considers the eclectic contacts, exchanges, and cohabitation of human and nonhuman animals.

You can read a review at the Literary Review of Canada.