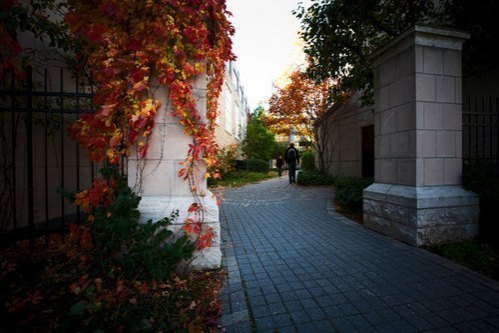 Campus in the fall, courtesy of the Queen’s Image Bank.

Apple hosts a 5-part series of remote talks in animal studies. The first talk, to take place on January 15, features Diego Rossello, (Universidad Adolfo Ibáñez) on “On the (Missing) Concept of the Political in Animal Rights Theory’s ‘Political Turn’: Towards Agonistic Politics in a Zoopolis”.

The Faculty of Arts and Science and the Queen’s University Library hosted the Fireplace Series: An Interdisciplinary Conversation on October 11, featuring Will Kymlicka, Canada Research Chair in Political Philosophy, and Samantha King, Head of the Department of Gender Studies, on the topic of Animals, Ethics, and Everyday Politics.

The Kingston Interspecies Communities research group hosted a workshop on the paper “Animal Agency in Community: A Political Multispecies Ethnography of VINE Sanctuary” by Charlotte Blattner, Sue Donaldson, and Ryan Wilcox on March 22.

Kathryn Gillepsie from the University of Washington gave a talk on “Doing multispecies ethnography: reflections on a feminist geographic approach to pedagogy” on October 31 at the Kingston Interspecies Community research group.

Charlotte Blattner returned to Queen’s for a presentation on “Animals, the Forgotten Proletariat” at the Ban Righ Centre Fall Speaker Series on October 12.

Dutch philosopher Eva Meijer visited Queen’s in September for two events: a Philosophy Department Colloquium talk on “The role of language in interspecies politics: Towards a theory of political animal voices”, and a workshop with the Kingston Interspecies Communities research group on the theme of “Conducting research in interspecies communities”.

APPLE’s member Charlotte Blattner gave a presentation on “Animals Are (Forced) Workers, Too” at the Philosophy Department’s weekly colloquium on March 15 and addressed questions such as “Can animals used for farming, research, circuses, zoos, or companion services be seen as ‘labourers’? Should animals be granted worker rights?”.

Helena Pedersen (University of Gothenburg, Sweden), an internationally renowned scholar of critical animal pedagogy, visited Queen’s University from October 16-18 under the auspices of the Principal’s International Visitor program. She presented a public lecture entitled “Posthumanist Education: Rethinking Human-Animal Relations in Teaching and Learning” on October 17 as well as co-organized a workshop on “Animal Studies Education, Research and Advocacy” on October 18, 2017.

Rosemary-Claire Collard (Simone de Beauvoir Institute at Concordia University) presented a paper on “Disaster capitalism and the quick, quick, slow unraveling of animal life” to the SNID research group on March 30, 2017. Collard explored how sea otters in Alaska have been oriented in capitalist social relations through three regimes of loss: their near extinction during the fur trade and early expansionist, colonial capitalism; petro-capitalism and the negligent neoliberal state, culminating in the Exxon Valdez oil spill, a death-dealing catastrophe for thousands of sea otters; and finally, spill cleanup, late capitalism, and advanced ecological crisis, when two dominant sea otter subjects are produced: the knowable animal and the enclosed animal. In each episode, she described how sea otters are oriented in relation to capitalist production and the state, and what kind of violence and loss attends these orientations.

Michael Runtz (Carleton University) presented a paper based on his recent book Dam Builders: The Natural History of Beavers and Their Ponds, to the Queen’s School of Environmental Studies Seminar series on March 23, 2017.

Kendra Coulter (Labour Studies, Brock University) presented a talk on “Animals, Work and the Promise of Interspecies Solidarity” on September 30th 2016, as part of the Department of Geography and School of Environmental Studies lecture series, co-sponsored by APPLE and the Lives of Animals research group.

Angela Martin presented her paper on “Affirmative Action for Animals” at the Philosophy Department colloquium on November 26, 2015. She discussed whether animals have a claim to affirmative action as a remedy for the forms of discrimination they have historically and currently suffer. Angela is currently a postdoctoral fellow at the Centre for Research in Ethics at the University of Montreal. She received her PhD in Philosophy from the University of Geneva, and has written extensively on the idea of vulnerability in bioethics, and its implications for animals. Angela also presented her paper “Animals as Vulnerable Research Subjects” at a more informal meeting of interested students and faculty on Friday November 27.

“Beating Hearts: Abortion and Animal Rights”: On Tuesday, October 13, 2015, Professors Sherry Colb and Michael Dorf from the Cornell Law School discussed the ways that pro-life arguments are invoked by both opponents of abortion and proponents of animal rights, and the political and philosophical challenges involved in linking or separating the two cases. Their presentation drew upon their forthcoming book Beating Hearts: Abortion and Animal Rights (Columbia University Press. 2016). Colb and Dorf are well-known commentators on a variety of constitutional law issues, including animal law cases. Some of Sherry’s more popular animal-related writings are collected in her Mind If I Order the Cheeseburger? And Other Questions People Ask Vegans (Lantern 2013). This event is part of the new Colloquium in Legal and Political Philosophy, an initiative of the Faculty of Law, the Department of Philosophy, and the Department of Political Studies.

“Animal Rights, Human Rights and the Future of the Planet”. On Wednesday, September 16, 2015, the APPLE research group, in association with the School of Environmental Studies, hosted a special discussion with Stephanie Feldstein (Population and Sustainability Director, Center for Biological Diversity) and Carter Dillard (Director of Litigation, Animal Legal Defense Fund). There are more than 7 billion people in the world today and approximately 56 billion land animals raised and slaughtered for food each year. Both of these numbers are quickly rising. Population growth and meat consumption are two of the leading causes of the current environmental crisis, and the mass extinction crisis, decimating what remains of our once biodiverse planet. Yet debates about sustainability and environmental ethics rarely mention either. Stephanie and Carter discussed the latest research on population growth, animal rights, and environmental ethics, and new ideas about how we can learn to share our finite planet.

Lynda Birke, Professor in the Department of Biological Sciences, University of Chester, UK delivered a public lecture on March 23, 2015, entitled “The Place of Animals In Science: Hidden in Plain Sight”. Birke is a pioneer in both feminist science studies, and human-animal studies. She is associate editor of the journals Society and Animals, and Humanimalia: A Journal of Human/Animal Interface Studies. She has written extensively on non-human animal experimentation, and her recent work focuses on human-equine relationships. Birke’s many books include: Feminism, Animals and Science: The Naming of the Shrew (1994); Reinventing Biology: Respect for Life and the Creation of Knowledge (with Ruth Hubbard, 1995); and The Sacrifice: How Scientific Experiments Transform Animals and People (with Arnold Arluke and Mike Michael, 2007). APPLE was pleased to be able to co-sponsor this special lecture with Gender Studies. Lynda Birke’s overlapping expertise in feminism, animals and science makes her an ideal speaker to address one of APPLE’s ongoing themes – the costs of a scientific model that positions animals as objects to be manipulated, analyzed and experimented upon; and the potential of alternative approaches that engage in scientific inquiry with animals rather than doing science on them.

Hayden Lorimer, Chair of Cultural Geography at the University of Glasgow gave a talk on Friday March 20, 2015 entitled “Gates of Heaven: Last Landscapes for the Companion Animal”. Lorimer’s visit to Queen’s was supported by the Principal’s Development Fund and the departments of Geography, Music, Cultural Studies, Sociology and Environmental Studies.

Dr. Alice J. Hovorka, Professor in the Department of Geography & School of Environmental Studies here at Queen’s, gave the Geography Department seminar on Tuesday January 27, 2015. The title of her talk was “Animal Bodies and Performativity: Exploring Donkey Lives in Botswana”. For more information on her work on animal lives in Botswana, see the website here.

Katherine Wayne delivered the Queen’s Department of Philosophy Colloquium on January 22, 2015. The title for her talk is “Doing right by our animal companions: does preventing reproduction make for bad care?”. Wayne has recently completed a SSHRC postdoctoral fellowship at Queen’s, and is currently a lecturer in Philosophy at Carleton University.

Tracy Isaacs delivered the Graham Kennedy Memorial Lecture on Thursday, September 11, 2014. The title for her talk was “Kitchen Nightmares: When Ethical Eaters Come to Dinner”. Isaacs is a Professor in the Departments of Philosophy and Women’s Studies and Feminist Research (WSFR) at Western University in London, Ontario. Her research focuses on issues of responsibility in collective action contexts, collective obligation, ethics and feminist ethics. She also works on feminist issues in sport and fitness, food, dieting and body image.

Tyler (T.J.) Kasperbauer delivered an APPLE-sponsored talk entitled “Should We Bring Back the Passenger Pigeon? The Ethics of De-extinction” on March 31, 2014. T J Kasperbauer was recently awarded his doctorate in Philosophy from Texas A & M University.

Maneesha Deckha gave a talk as part of the Queen’s Faculty of Law Visiting Speakers and Lecturers Program on November 22, 2013. The title of her talk was “Beyond Personhood: Toward an Embodied Legal Subjectivity for Animals”. Deckha is Associate Professor of Law at the University of Victoria. Her research interests include critical animal law, postcolonial feminist theory, health law and bioethics. Her work has appeared in Hypatia, Ethics & the Environment, the Harvard Journal of Gender and Law, the Journal for Critical Animal Studies, the McGill Law Journal, and Sexualities among other publications. She has received grants from the Canadian Institutes of Health Research and the Social Sciences and Humanities Research Council. In 2008 she held the Fulbright Visiting Chair in Law and Society at New York University.

Zipporah Weisberg delivered the Queen’s Department of Philosophy Colloquium on November 21, 2013. The title for her talk was “Phenomenology, Ethology and Animal Ethics”. Weisberg was the Abby Benjamin Postdoctoral Fellow in Animal Ethics at Queen’s University from 2013-2015.

Jeff McMahan delivered the Chancellor Dunning Trust Lecture on October 31, 2013. The title for his talk was “Killing Animals and Causing them to Suffer”. McMahan is Professor of Philosophy, Rutgers University. He began his doctoral work at Oxford University under the supervision of Jonathan Glover and Derek Parfit, then completed the PhD at Cambridge University under the supervision of Bernard Williams. He is the author of The Ethics of Killing: Problems at the Margins of Life (Oxford University Press, 2002) and Killing in Warn(Oxford University Press, 2009). He has several other books forthcoming from Oxford University Press, including a collection of essays called The Values of Lives, a book on war intended for both academic and nonacademic readers called The Right Way to Fight, and a sequel to his 2002 book called The Ethics of Killing: Self-Defense, War, and Punishment.

Gary Steiner delivered the Queen’s Department of Philosophy Colloquium on September 26, 2013. The title for his talk was “The Pathocentric Basis of Animal Rights”. Steiner is John Howard Harris Professor of Philosophy at Bucknell University in Lewisburg, PA, where he has taught since 1987. He is the author of Descartes as a Moral Thinker: Christianity, Technology, Nihilism (2004); Anthropocentrism and Its Discontents: The Moral Status of Animals in the History of Western Philosophy (2005); Animals and the Moral Community: Mental Life, Moral Status, and Kinship (2008); and Animals and the Limits of Postmodernism (2013).