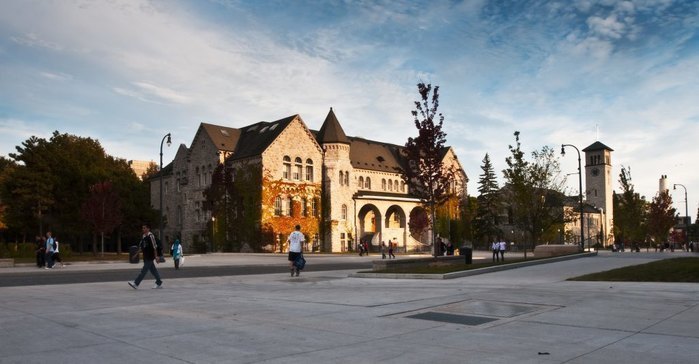 Ontario Hall in the fall, courtesy of Queen’s Image Bank.

APPLE and the Department of Philosophy at Queen’s University announce the appointment of two postdoctoral fellows in animal ethics.

Pablo Perez Castelló and Birte Wrage will commence their appointments in July and August 2022 respectively.

Pablo P. Castelló is the 2022-2024 Postdoctoral Fellow in Animal Studies at the Department of Philosophy, Queen’s University. He completed his PhD on “The Language of Zoodemocracy” at Royal Holloway University in London in 2022, and has worked as a Research Assistant at the Cambridge Centre for Animal Rights Law. Pablo’s project at Queen’s develops his theory of “zoodemocracy” – focusing on (i) how animals tell us about the infrastructure they want, the fundamental legal rights they demand, and the common good they co-author; and (ii) the institutional mechanisms for translating animals’ political agency into concrete policies, and law. He has published in several philosophy, conservation, and law journals, including Hypatia: A Journal of Feminist Philosophy, Animal Studies Journal, and the Journal of International Wildlife Law and Policy. His research also engages with ecofeminism, postcolonialism, disability studies, and critical race theory (pablo.castello@protonmail.com; twitter: @PabloPCastello)

Birte Wrage is the 2022-23 Postdoctoral Fellow in Animal Studies at Queen’s University. They completed their PhD in philosophy on morality in nonhuman animals at the Messerli Research Institute (Vetmeduni Vienna, Uni Vienna, MedUni Vienna) in 2022. Their research is situated at the intersection of philosophy of animal minds and animal ethics, aiming to recognize nonhuman animals as more-than-sentient beings. Birte is also interested in the contribution of the tactile sense to moral perception, and the role of social touch as a precursor to language in the moral practices of nonverbal animals. Their work has been published in Philosophical Psychology and Biology & Philosophy. Email: b.wrage@queensu.ca

The Department of Philosophy at Queen’s University in Kingston, Canada offers a Postdoctoral Fellowship in Animal Studies. This is a two-year non-renewable fellowship, supporting a researcher with demonstrated expertise in animal ethics, law and public policy. While we interpret animal ethics, law and public policy broadly, and welcome applications from various disciplines that study human-animal relations including political science, law, philosophy, sociology, geography, and environmental studies, we are particularly interested in research that critically examines the moral, legal and political dimensions of how human-animal relations are governed. The recipient of the Fellowship is expected to be actively involved in the day-to-day life of the University, to teach a University course in animal ethics each year, to participate in the activities of our animal studies research group (http://animalpolitics.queensu.ca/), and to help organize a workshop or conference in the field. The Fellow works under the supervision of Prof. Will Kymlicka.